Powered by proprietary CAT5™ technology, the RNAstorm™ extraction kit enhances the removal of formaldehyde-induced damage and provides RNA with higher yield and quality, better integrity, and greater amplifiability. This technology was developed by Cell Data Sciences researchers, building on research initiated at Stanford University, and published in Nature Chemistry in 2015.

Whether you are performing RNA-seq, qPCR, microarray or other gene expression analysis, the RNAstorm™ kit is your best chance for success.

A simple and convenient workflow

The RNAstorm kit offers a convenient workflow for extraction of high-yield and high-integrity RNA from FFPE samples.

The kit can also be combined with the DNAstorm™ kit to obtain pure DNA and RNA from the same tissue section.

Significant improvements in RNA yield and quality (as measured by amount of amplifiable RNA) are seen using the RNAstorm™ kit on FFPE samples from various tissues and ranging in age from 1976 to 2015.


An exemplary overlay of BioAnalyzer traces obtained using RNA from the same sample as seen with the RNAstorm™ kit and Kit Q is shown below. 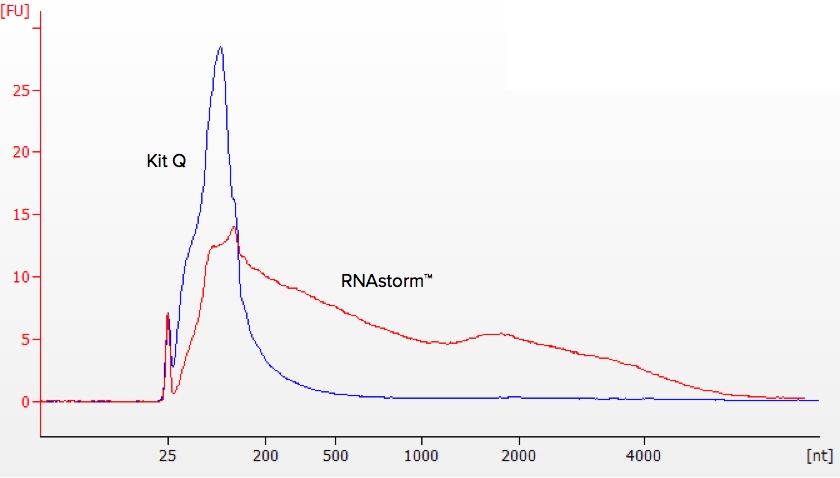 Technical Note - Next Generation Sequencing of RNA from FFPE Samples

Is any contaminating genomic DNA present in the RNA obtained using the RNAstorm™ kit?

Contamination from genomic DNA is a big concern because it can intefere with downstream applications. The RNAstorm™ kit includes an optimized DNase digestion step which removes contaminating genomic DNA without significantly affecting RNA yield. While this step is optional, it is highly recommended.

How much RNA can I expect to obtain from an FFPE sample?

The biggest variable that affects the total amount of RNA obtained is the quality of the sample itself (i.e. the type and amount of tissue, and the care taken in isolation and preservation of the sample). Using the RNAstorm™ kit, and assuming at least reasonable sample quality, amounts greater than 1 µg can be obtained.

Can RNA obtained using the RNAstorm™ kit be used in RNA-Seq?

Yes. Good quality libraries can be obtained, providing that the RNA is of sufficiently high quality. For Illumina sequencing, a DV200 of at least 30% is recommended, and samples should be used that provide at least 1 µg of RNA.

How should the tissue be prepared?

Use a microtome to obtain 5-10 µm sections from FFPE samples. Sections thinner than 5 µm may be used if they can be reliably cut. Sections thicker than 10 µm are not recommended because they may not be fully digested. Also, no more than 5 sections (10 µM each) should be used for each extraction. Using too much tissue can lead to incomplete digestion and reduced yields.

Can I use tissue that is not paraffin-embedded?

Yes, tissue can be used which is not embedded in paraffin. In this case, we recommend mechanically grinding an amount of tissue equivalent to the recommended number of sections.

Can I use FFPE cores?

Yes, FFPE cores can be used. Because cores are not processed using a microtome, sample digestion tends to be more difficult and mechanical homogenization (e.g. using steel beads) is recommended if incomplete digestion is observed.

Which deparaffinization method do you recommend?

What is the best way to quantitate RNA obtained from FFPE samples?

FFPE-derived RNA is much more challenging to quantitate accurately than RNA obtained from fresh samples. It is not enough to know the absolute amount of RNA that is present, but also whether the RNA will work in downstream applications, which depends on the following factors:

Should RIN numbers be used to determine quality of FFPE-derived RNA?

Although the RIN number can provide general information about the extent of sample fragmentation, it is not sensitive or predictable enough to be a useful indicator of downstream performance, especially for RNA-Seq. Very often, RIN numbers for FFPE-derived RNA will be between 2 and 3. Some of these samples will be useful for RNA-Seq, and others won’t - the RIN will not tell you, however.

A slightly better predictor of performance in RNA-Seq using Illumina sequencing is the DV200, which represents the percentage of RNA fragments longer than 200 nucleotides. The DV200 is also calculated based on Bioanalyzer data, but suffers from the same drawbacks as all Bioanalyzer-based methods, specifically high variability.

What do I need to know when extracting RNA from FFPE samples?