Powered by proprietary CAT5™ technology, the DNAstorm™ FFPE extraction kit enhances the removal of formaldehyde-induced damage and provides DNA with higher yield and quality and greater amplifiability. The DNAstorm™ kit is the best solution for next-generation sequencing and other advanced applications. 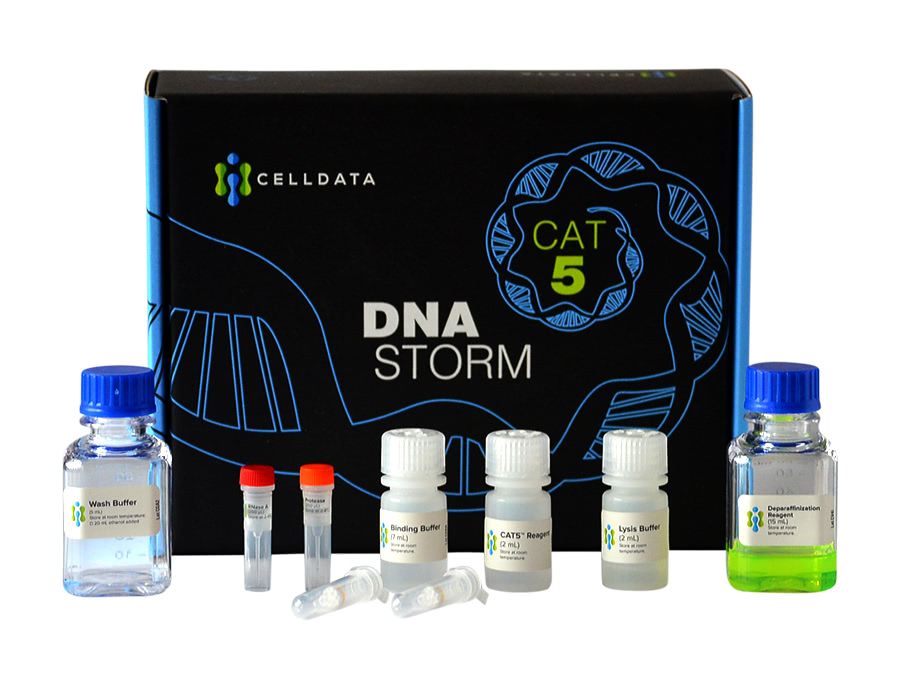 A simple and convenient workflow

The DNAstorm™ kit offers a convenient workflow (spin-column or MagBead-based) for efficient extraction of high-yield and high quality DNA from FFPE samples.

The kit can also be combined with the RNAstorm™ FFPE kit to obtain pure DNA and RNA from the same tissue section.

Is there any contaminating RNA in the DNA obtained using the DNAstorm™ kit?

How much DNA can I expect to obtain from an FFPE sample?

The biggest variable that affects the total amount of DNA obtained is the quality of the sample itself (i.e. the type and amount of tissue, and the care taken in isolation and preservation of the sample). Using the DNAstorm™ kit, and assuming at least reasonable sample quality, amounts greater than 1 µg can be obtained.

Can DNA obtained using the DNAstorm™ kit be used in next-generation sequencing?

Yes. Good quality libraries can be obtained, providing that the DNA is of sufficiently high quality.

How should the tissue be prepared?

Use a microtome to obtain 5-10 µm sections from FFPE samples. Sections thinner than 5 µm may be used if they can be reliably cut. Sections thicker than 10 µm are not recommended because they may not be fully digested.

Can I use tissue that is not paraffin-embedded?

Yes, tissue can be used which is not embedded in paraffin. In this case, we recommend mechanically grinding an amount of tissue equivalent to the recommended number of sections.

Can I use FFPE cores?

Yes, FFPE cores can be used. Because cores are not processed using a microtome, sample digestion tends to be more difficult and mechanical homogenization (e.g. using steel beads) is recommended if incomplete digestion is observed.

Which deparaffinization method do you recommend?

The white cloudy layer is an emulsion between the Deparaffinization Reagent and the CAT5 Lysis Buffer, which may form when these two reagents are vortexed or given a hard mix. To avoid this issue, we recommend not vortexing the sample when the Deparaffinization Reagent and CAT5 Lysis Buffer are in contact. When mixing is necessary in the presence of both these reagents (e.g. when protease is added), we recommend pipette mixing. The white cloudy layer can be removed by giving the sample a hard spin at maximum speed (> 16,000 x g) for at least 2 minutes. The length of time will depend on the volume of the emulsion.

How can I evaluate the integrity of the DNA I obtained?

Due to the wide size distribution of DNA isolated from FFPE tissue samples, we recommend using pulsed-field gel electrophoresis (PFGE). Methods based on capillary electrophoresis such as the Agilent BioAnalyzer can also be used, but may not properly resolve high molecular weight fragments (greater than 10k) in better-quality samples.

Why does my extracted DNA fail to amplify properly? I notice a lot of PCR inhibition and/or Ct values that make no sense.